Known to be one of the most prestigious military academies in the entire world, West Point Military Academy began training cadets in 1794. However, the location was first established as a post for the Continental Army on January 27, 1778 and served as a key command in preventing the British Navy from traveling south on the Hudson River. The prominent lookout today provides a breathtaking view of the Hudson, but that same view provided the Army plenty of time to arm their defenses and ultimately protect the land we now call New York.

The story of West Point is indeed a lengthy one. I couldn’t possibly include every single interesting bit of information about the Academy in this post, but I still wanted to share a quick bit about my visit and hopefully inspire my fellow New York adventurers to take advantage of the offered tours if you’re in the area.


I typically struggle under the confines of guided tours, but because of the strong military presence and obvious security concerns, really the only way for anyone who isn’t a family member of a cadet to tour the grounds is on a bus led by a guide. That also means that a lot of stuff was left off the tour that I would’ve loved to see. 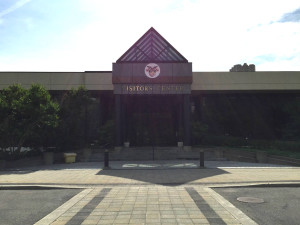 A Visitor’s Center that is technically off-site has a huge book/gift shop and a few things to get you started. A staged cadet’s living quarters and a few reading plaques really are about it. But, behind the Visitor Center is the West Point Museum. Considered to be the oldest and largest public collection of military collectibles in the entire Western Hemisphere, the museum offers multiple floors of an incredible collection of weaponry, uniforms, books, maps, ephemera and essentially anything else you could think of. Anyone who really is interested in war history or military topics could spend hours here. If providing public access to an invaluable collection isn’t service enough to the public, they make entry into the museum entirely free.

Once passing through the security gate into West Point, visitors will first notice the historic Thayer Hotel. Named for the ‘Father of the Military Academy’ Sylvanus Thayer who was a graduate of the 1808 class, the hotel has 151 rooms and overlooks the Hudson River. While a long list of famous folks like Edgar Allen Poe, Winfield Scott, Robert E. Lee, Ulysses Grant and Stonewall Jackson have all spent time there, another well known story about the hotel includes a much more modern overnight accommodation. At the end of the 444 day Iranian Hostage Crisis that ended in 1981, the 52 Americans who returned home were brought directly to the Thayer Hotel to be reunited with their families. The bus tour doesn’t go to the hotel, but visitors are able to get in with no problem.

Our tour stopped at the West Point Cadet Chapel, where we were able to get out and walk through the entire chapel. The medieval looking Gothic grey, granite building was dedicated in 1910 and features the largest pipe organ within a religious building in the entire world. Though, unfortunately, no one was playing it at the time. There is also a constantly burning candle in one of the forward pews for MIA and POWs. The cadet chapel was really awesome, but I’d be lying if I said I wasn’t just a tad bummed that we weren’t able to hear the organ and that we skipped the Orthodox Chapel, the Jewish Chapel, the Interfaith Chapel, the Catholic Chapel and a Post Chapel. Also on the tour was the West Point Cemetery which, for me, was one of the highlights. General Custer, General Norman Schwarzkopf and even his father along with Daniel Butterfield (who wrote “Taps”) are a few of the folks who now forever call West Point home. Located in the cemetery is the Old Cadet Chapel, which we also got to see. Built in 1836, the Greek Revival structure was the original chapel for cadets prior to the Cadet Chapel I mentioned above being built in 1910. The Old one was disassembled entirely piece by piece, moved and reconstructed to remain in the cemetery. One of the more noteworthy aspects of the chapel is an original collection of plaques honoring many previous cadets, one of which is entirely illegible due to the name of an infamous traitor  having his name scratched out after he defected to the British military. Benedict Arnold’s legacy as the former commanding General at West Point was sullied after his plans to give the entire fort over to the British were uncovered. Arnold escaped down the Hudson River before George Washington could get his hands on him though, and, even today, Benedict Arnold’s name remains somewhat synonymous with betrayal.

Even though my tour coincided with the current class of cadets being on break, there was still a strong Military Police presence and a few uniformed folks milling about on campus. While sitting at the parade route for cadets, it was a scene that I could only imagine to picture thousands of Army cadets marching in unison and preparing to serve the country. If you’re in the area and appreciate history, a tour of West Point is one I highly recommend!

Poughkeepsie’s Walkway Over the Hudson

This Day In Upstate History